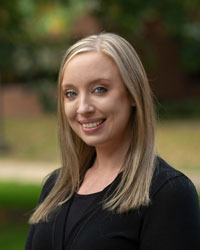 After completing her degree at Pitt-Bradford in the spring of 2011, Jen spent the following 10 years working in the field of human services primarily in a supervisory role within McKean County. During her freshman year at UPB she met her now husband Caleb. They were married in the campus chapel in September of 2012. Jen returned to Pitt-Bradford as a staff member in August of 2021. She and Caleb live in Kane, along with their two cats.