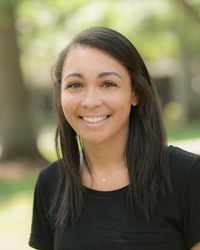 Kaserra Owens will serve as the Interim Head Women's Basketball Coach for the 2019-20 season. Owens is a 2017 Pitt-Bradford graduate who served on the Panthers' coaching staff during the 2018-19 season as an assistant.

The Bradford native was a four-year starter for the Panthers from 2013-17, appearing in 97 games and starting 89 while scoring 900 career points, pulling in 503 career rebounds and dishing 172 career assists.