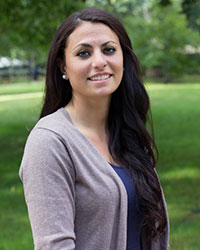 She comes from Houghton College, where she was a standout player and assistant coach for longtime head coach David Lewis.

Graham graduated from Houghton with a bachelor's degree in Physical Education and a minor in sports Ministry in 2013.

After graduation, she spent two years as the girls' soccer varsity head coach at Avoca Central School in Avoca, NY, where she saw seven total players selected as league all-stars and four named to the Exceptional Senior Team.

In 2016, she returned to her alma mater to serve as an assistant coach focusing on the relational aspect of coaching, building and maintaining strong connections with her players. During this season she helped Lewis guide a young team to the NCCAA Division I National Tournament Final Four.

Melissa is married to Athletic Training Professor, Doug Graham, and currently resides in Bradford. And is an active leader in Pitt-Bradford Christian Athletes Fellowship.