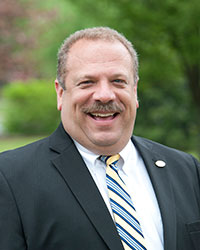 Alex is originally from Warren Township, NJ and currently resides in Allegany, NY. He began his career in admissions in 1986. He's worked at Pitt-Bradford since the fall of 1999, and enjoys his experience here as director of admissions and the advisor for the brothers of Sigma Lambda Chi social fraternity. He is a New Jersey Devils and Buffalo Sabres fan and roots for the New York Giants.

Alex is an avid collector of U.S. stamps, and has collected them since he was 7. As an undergraduate at St. Bonaventure University, he played on the Men's Club Rugby Team and organized the original alumni rugby program there. He is currently a New York State elected official, and is serving a 4 year term as a Trustee for the Village of Allegany (NY).