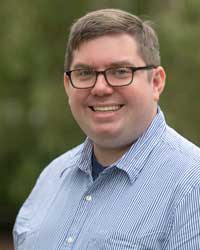 Dr. Flanagan has previously taught at Brandeis University and in the Institut d'études politiques de Paris (Sciences Po) Europe-Asia program in Le Havre, France. He has conducted archival research in France and Germany. He speaks French and reads German. He plays guitar and violin, sings, and writes folk songs.

Dr. Flanagan is a specialist in 20th century French and German history, with a focus on the Second World War and the early postwar period, transnational and borderlands history, war and society studies, political anthropology and the history of memory. He teaches broadly in the areas of European and world history. At Pitt-Bradford, he teaches survey, intermediate and upper-division courses including “Renaissance and Reformation in Europe,” “Global History,” “World War II,” “Colonial Empires in the Modern World,” “East Asia: China, Korea, Japan” and “Fascism and Neo-Fascism.”

Dr. Flanagan has received a number of prestigious grants and fellowships, including a Chateaubriand Humanities and Social Sciences Fellowship from the Embassy of France in the United States and a National Endowment for the Humanities summer scholarship.

He is completing a manuscript for a book on the Allied occupation of Germany after the Second World War (1945-1955), focusing on the French Zone of Occupation in southwestern Germany. The book places the French occupation in the global context of decolonization in the French Colonial Empire (after 1946, the French Union), and considers how French occupiers applied experience and knowledge gained in the colonies to their mission in post-Nazi Germany.

Dr. Flanagan is currently completing an article manuscript on the career of orientalist, archaeologist, and propagandist Robert Boutet between French Morocco and occupied Germany. He has previously published two chapters in edited volumes: