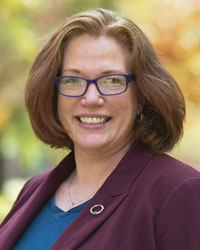 Assistant Director of Communications and Marketing

Kimberly is responsible for writing and distributing all of our press releases, handling media relations, producing Portraits alumni magazine and assisting to enhance and protect the image, recognition and reputation of the institution. She is also the primary social media contact and creator of content for the university's accounts on Facebook and Twitter.

Before coming to Pitt-Bradford, Kimberly was a stay-at-home mom and freelance writer and designer. Prior to that, she worked for a decade at two community newspapers, The News-Gazette in Lexington, Va., and The Bradford Era, where she was features editor, then city editor.

When she's not hunched over her iPhone, Kimberly is often listening to NPR or schlepping her teenage daughter, Maddy, to gymnastics or watching her son, Preston, play basketball for Bradford Area High School. She is a member and past president of the Kiwanis Club of Bradford and volunteers with the Bradford Owls basketball boosters. Her husband, Rick, is an active alumnus who graduated in 1994. They live in Bradford with their aforementioned children, Cavalier King Charles Spaniel, Andy, and cat, which the children mysteriously named after Jackie Robinson.

Kimberly was the 1994 winner of Best in Show writing for the Virginia Press Association and has won several awards from the Pennsylvania Newspaper Association for special projects, public service, investigative reporting and features.