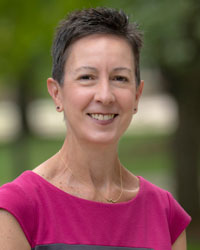 Executive Director of Communications and Marketing

Pat leads all of the university's marketing and communications efforts, including overseeing all publications and advertising, championing the university's brand, publishing its award-winning alumni magazine, and protecting Pitt-Bradford's image. She also serves as the university's spokeswoman and is a member of the President's Cabinet. She also has taught social media communication and journalism courses, introducing students to the wild, wacky world of digital and analog communications.

In a previous life, she was a newspaper reporter and editor for 15 years.

She is a former member of the board of directors for YWCA Bradford and is a member of the Community Relations Committee of the Bradford Area Public Library. In her spare time, she reads, cooks and spends as much time in the woods as she can to photograph wildlife. She received this year's Community Choice Award in the Audubon Community Nature Center's nature photography contest for a photo she captured of a red fox with four different critters in its mouth.

She has had some of her work published, including an abridged first chapter of her novel-in-progress, "Pulling the Loose Thread" which appeared in the 2015 edition of Baily's Beads, Pitt-Bradford's award-winning literary magazine. Additionally, her "This I Believe" essay was broadcast on NPR station WPSU in State College in October 2010.

Her most popular piece, an essay titled "The Card," was published in May 2006 in The New York Times bestselling book Wisdom of our Fathers: Lessons and Letters from Daughters and Sons by the late Tim Russert.