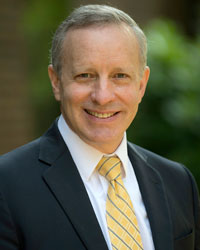 Interim President, University of Pittsburgh at Bradford and Titusville


Office of the President

Interim President Rick Esch is a proud Pitt-Bradford and Pitt graduate who has deep roots both in the university community as well as the surrounding community.

Earlier this year, he received Pitt-Bradford’s Staff Recognition Award for his leadership in helping the campus navigate the COVID-19 pandemic. For nearly 18 months, in addition to overseeing several campus departments, including budget and financial reporting, auxiliary services and facilities management, he has represented Pitt-Bradford and Pitt-Titusville on the Chancellor’s Resilience Steering Committee and has worked closely with Pitt’s COVID-19 Medical Response Office. He also has collaborated with local, regional and state agencies, including the McKean County and Crawford County Emergency Management agencies, UPMC and Bradford Regional Medical Center.

He also assembled and continues to lead a COVID-19 Mitigation Response Team, which included representatives from most offices at Pitt-Bradford and Pitt-Titusville. Under his leadership, the team successfully implemented many changes on campus, including testing asymptomatic students weekly; isolating and quarantining symptomatic students; adapting the physical plant, including the dining hall and classrooms, to enable physical distancing; purchasing masks, signage and other materials; and identifying vaccinations sites.