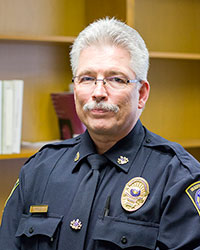 Director of Campus Police and Safety

Chief Harsen served 32 years with the Bradford City Police, many of those as a juvenile officer and school resource officer, before joining the Pitt-Bradford police force as a full-time officer in 2015.

His record with Pitt-Bradford extends back to 2005, however, when he began working as a part-time officer with the campus police.

Chief Harsen said he has long hoped he might have the opportunity to lead the department because he enjoys working with young people.

In addition to his work as the juvenile officer and middle school resource officer, he coached youth softball, baseball, football and basketball for 18 years. While with the city police, he and then-colleague Dominic Cercone began the city's Drug Abuse Resistance Education program.