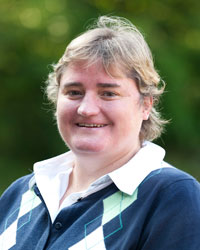 Tina Phillips is in her 17th season as the head softball coach at Pitt-Bradford. She also serves as the senior woman administrator/assistant athletic director and compliance coordinator.

Since her arrival in 2003, Phillips teams have rewritten the record books. The all-time winningest coach in program, Phillips has put together a 317-310 record (175-119 in conference play), including some of the greatest seasons in Pitt-Bradford history.

Under Phillips's watch, the Panthers excelled on and off the field at the conference and national level. Pitt-Bradford has had 61 All-Conference performers, including the 2010 AMCC Newcomer of the Year, 2008 Player of the Year and 2013 Pitcher of the Year. She was named the Coach of the Year twice. She has had seven National Fastpitch Coaches Association All-Region players and 78 NFCA Scholar-Athletes. Phillips also has had four players named to the ECAC South All-Region team.

Phillips also served as the head coach of the Pitt-Bradford volleyball program for 12 years and is the program's winningest coach with over 150 wins. Her teams finished sixth or better every season and made it to the AMCC tournament in all of her 12 seasons.

In 2010, Phillips directed the Panthers to the best season in program history when the team won a school-record 22 straight matches, capturing the AMCC regular season crown with a perfect 9-0 record and earning the program's first-ever bid to the NCAA tournament. The team finished with a 24-4 record, still the best winning percentage in the program's history. She was named AMCC Coach of the Year.

The volleyball squad also excelled on the academic side. The team received the American Volleyball Coaches Association Team Academic Award twice. She also coached 30 AMCC All-conference players, including the 2007 Newcomer of the Year and 2010 Player of the Year.

Before coming to Pitt-Bradford, she served as the head softball/volleyball coach and assistant athletic director at Sage Colleges, Troy, NY. She spent two years at United Merchant Marine Academy in Kings Point, NY as the director of the Blue & Gray Club and assistant softball coach. She helped guide the program to its first-ever Skyline Conference championship and NCAA Tournament appearance.

Phillips has been elected into both the Thomas A. Edison High School and Chemung County (NY) Athletic Halls of Fame.

She was the head coach in volleyball, girls' basketball and softball (65-24) at Thomas Edison from 1993-96 and was inducted into their Hall of Fame in '99. She tallied her 200th victory at the helm of the Pitt-Bradford softball program in game one of the 2014 season.