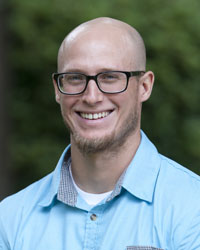 Zach Foster has been head baseball coach since 2016. The 2019 Panthers picked up 16 total wins and nine AMCC victories in Foster's third full season at the helm. Two of his players earned All-AMCC honors, while another picked up National Collegiate Baseball Writers' Association Pitcher of the Week Honorable Mention after fanning 16 opposing batters in his lone start of the season.

In his second full season leading the Panthers in 2018, he guided Pitt-Bradford to one of its most successful seasons in recent time. The team finished 17-16 overall and 10-8 in AMCC play, as the 10 regular-season conference victories were the program's most since 2010. As a result, Pitt-Bradford earned the No. 4 seed in the AMCC Championship Tournament and hosted Penn State-Altoona for the first round.

Under Foster's tutelage, catcher Austin Parent put together one of the best seasons in the country as he led the nation in hitting and on-base percentage while finishing second in NCAA Division III with a .916 slugging percentage. Parent became the first player in Pitt-Bradford baseball history to receive All-America status and was named to the First Team for both D3Baseball and the American Baseball Coaches' Association. Parent was also voted the AMCC Player of the Year, the fourth player in Pitt-Bradford history.

At the helm in 2017, he led the Panthers to 16 wins, half of which came against AMCC opponents, and a trip to the conference semifinals. In addition to the team's third-place finish in the conference tournament, three players earned All-AMCC honors and another received the AMCC FAR Award.

Born and raised in Bradford,  Foster played for Pitt-Bradford from 2005-2008, compiling a 5-2 record and 5.77 ERA in 18 appearances. He was drafted in the 49th round of the Major League Baseball Amateur Draft by the Pirates, the first player in the history of the AMCC to do so. He advanced as far as Double-A with the Pirates before returning to Pitt-Bradford as an assistance coach in 2013.

Foster lives in Bradford with his wife, Hannah, and their son, Ezekiel.