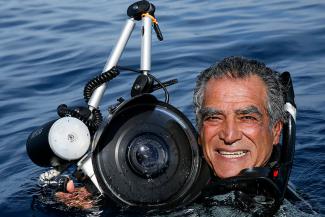 Amos Nachoum is one of the greatest explorers and underwater photographers of all times. In his lecture, Amos talks about the thought process and preparations a photographer needs to make before each assignment and every day for their work. Using his imagery as examples, he will discuss thinking about creating images that have not been seen before, and what it takes to successfully execute them. He will draw on his years of experience working for such clients as Apple, IBM, Microsoft, Discovery Channel, Armani, Disney, and Colombia Pictures.

His photos and essays have appeared in hundreds of publications around the globe, including National Geographic, Time, Life, The New York Times, Condé Nast Traveler, Le Figaro, Terra Sauvage, Airone, Mondo Somerso, Der Spiegel, Unterwasser, and many more. His work has also been included in the books The Living Ocean, The World of Nature, and Oceans. He has appeared on National Geographic Explorer, Today, and Good Morning America and featured in People, Esquire, and Money magazines. Amos’s photography has won Nikon, Communication Arts, and BBC Wildlife Photographer of the Year awards.